The Ultimate Guide of Antioxidant Sesamol

Sesamol (533-31-3), which is also referred to by industrial users as Sesamol 533-31-3 or 3,4-(Methylenedioxy)phenol, is one of the lignan compounds which are extracted from roasted sesame oil. Besides the sesame phenol, other lignan compound extracts of the oil are sesamin and sesamolin.

Sesamol is an phenolic antioxidant compound that has been played a very significant role in the medical field as it’s been found to have properties that can be used in cancer treatment. This compound is soluble in water and is characterized by a remarkable oxidant capacity.

Because of its strong oxidation properties, sesamol 533-31-3 is popularly used as an oxidant in treatment drugs as well as foods. In the healthcare field, particularly pharmaceutical synthesis, the compound is used as a starting material in the production of drugs that are used for treating hypertension as well as cardiovascular medicines.

Also, sesamol phenol can also be used as a raw material in the manufacturing of a pesticide called piperonyl butyl ether.

How to Synthesis Sesamol

There are three methods for Sesamol synthesis:

Sesamol synthesis from Sesame oil is the easiest of the three methods. However, the resulting Sesame is characterized by high solvent consumption and is quite costly. As such, this method is not ideal for industrial production, especially due to high production costs.

Although it is fairly economical for large scale Sesamol prodution, the entire route for sesamol synthesis from piperamine applies for small scale production when hydrolysis and hydrolysis process is employed. In such a case, pigment formation as a result coupling and side reaction is unavoidable.

Worse still for this process, it is extremely difficult to remove the formed pigments. Consequently, due to the undesired pigmentation, the synthesized Sesame has limited application.

Semi-synthetic route originating from jasmonaldehyde is the most widely used sesame phenol synthesis process as far as industrial purposes are concerned. The process involves oxidation and hydrolysis and because of that, the resulting sesame phenol is of high quality and great color.

The process uses cost-efficient oxidant and reactive extraction technology, enabling quick separation of the product from the extraction zone. This minimizes the possibility of side reaction occurrence significantly. No wonder the final product (white-like crystal) is of high quality in terms of colour and sesamol density.

The mechanism of HepG2 cells apoptosis as a result of sesamol cancer treatment remained unclear though, until a recent study by Zhigang Liu-led team of researchers.

The research was done to establish the efficacy of sesamol cancer treatment as an anti-tumor and the role of mitochondria as far as sesamol-induced effects are concerned, using human HepG2 cells.

The results of the research indicated that sesamol cancer treatment inhibited colony formation and caused S phase arrest in the process of progression of the cell cycle, in addition to inducing intrinsic and extrinsic apoptotic conduit in vitro.

The researchers noted that Sesamol powder (533-31-3) obstructed the PI3K Class III pathway thus interfering adversely with both mitophagy and autophagy.

In another study by Thushara RM et al to evaluate sesamol effectiveness in ICV-STZ-induced cognitive shortages, tats were used as specimen. ICV-STZ caused noteworthy cognitive deficits and high nitrodative stress as well as altered acetylcholinesterase and increased serum TNF-a levels in the rats.

After the affected rats were given sesamol chronic treatment, the researchers noted reduced oxidative stress parameters. As such, they concluded that sesamol is an effective treatment of ICV-STZ-induced neuronal dysfunction as well as memory shortfalls.

Another research that was recently done by Tian, H., and Guo, R to evaluate the role of sesamol in the treatment of myocardial ischemia-reperfusion (M I/R). Rats were used in the study and had received Sesamol pretreatment (50 mg/kg) for seven days prior to getting an M I/R injury infliction.

A surgery was performed on the rats to alter the apoptotic-related gene protein expression. The researchers found out that sesamol not only caused a significant reduction on the infarct size and lipid peroxidation, but also caused major inflammatory gene downregulation and anti-apoptotic Bcl-2 protein upregulation.

As such, the researchers concluded that sesamol applies the cardioprotective property to improve M I/R injury.

How does Sesamol work, mechanism of action

Sesamol, together with its conjugated metabolites, is distributed in body tissues like liver, brain, lungs as well as the kidneys.

When Sesamol is absorbed in the body, it protects DNA from damages and enhances DNA repair to rectify afterγ-radiation damage.

Because of its varied vivo bioactivities, sesamol plays an important role in the treatment of various diseases. One study established that sesamol inhibits the HepG2 cell colony formation. This supports other studies that suggest that Sesamol powder (533-31-3) ruins the viability of the cancer cells.

Normally, the majority of cancer cells need more oxidative stress as compared to the healthy cells in order to maintain the proliferation-apoptosis balance.

Some H2O2 level is required in the process to act as signaling molecules within the Ras-Raf-MEK-ERK pathway, thus the ability to stimulate redox-sensitive transcription factors like NFκB ( a protein complex that regulates DNA transcription, the survival of cells as well as the production of cytokine) and responsive genes that support the survival of cancer cells.

In addition to making your body more sensitive to insulin fluctuations, sesamol promotes the metabolism of brain energy as well as the brain cells. It minimizes the levels of blood glucose levels and boosts  Streptozotocin (STZ), which are primarily meant to deter the functionality of the beta cells that are responsible for the production of insulin in the pancreas.

Nevertheless, too much H2O2 triggers cell cycle arrest/aspoptosis. Sesamol causes mitochondrial dysfunction and increases the production of H2O2, consequently increasing HepG2 cell oxidative stress. The increased stress level causes a reduction in the production and release of the substances that may lead to the production of inflammations that could lead to cancer.

Some studies indicate that the interaction of sesamol and DNA is likely to take place at the latter’s groove. Still on that, another research study shows that the cell cycle that has been induced by sesamol arrest at S phase, and this happens in a concentration-dependent way. This is how sesamol causes DNA damage and obstructs the replication of DNA.

The major benefit of sesamol is Neuroprotection and here’s how it offers that:

Sesamol plays a significant role in the regulation of insulin signaling pathway in the brain. The antioxidant activated the IRS-1/AKT molecular pathway, and this makes the body to respond more quickly to insulin level changes.

In addition to making your body more sensitive to insulin fluctuations, sesamol promotes the metabolism of brain energy as well as the brain cells. It minimizes the levels of blood glucose levels and boosts  Streptozotocin (STZ) , which are primarily meant to deter the functionality of the beta cells that are responsible for the production of insulin in the pancreas.

The oxidating compound achieves that by boosting the brain’s oxidative stress. This reduces the production and release of the substances that might result in cancer-causing inflammations. Besides, the functionality of the barrier between the blood and the brain is improved.

As a result, a person’s susceptibility to brain conditions such as Alzheimer’s disease and neurodegenerative lesions is minimized. This also means that a person who already has brain structural abnormalities as a result of old age or Alzheimer’s disease, among other brain-related issues can experience a relief of the related symptoms should they use sesamol as recommended.

At the same time, the oxidant reduces the activity of cholinesterase (AchE). As such, researchers have established that sesamol has a positive effect on the learning as well as the memory function in humans.

Besides neuroprotection, here are other benefits of sesamol:

Being a natural food extract with robust Antioxidant properties, sesamol can be used to make animal meat particularly, pork and beef, has an extended shelf life. It prevents the oxidative deterioration in stored meat, making it remain in good shape without introducing elements that might have pose health risks to consumers.

When used alongside double-layer packaging, research has found sesamol helpful in the prevention of turkey chest raw meat or cooked meat discoloration.

A series of research studies have revealed the ability of sesamol in the prevention of the growth of lukemia cells in humans. The natural oxidant offers this benefit in a concentration-dependent way. Fortunately, unlike some other potential anti-tumor compounds, sesamol doesn’t cause any adverse effect on normal human cells.

Free radicals can cause various health conditions if their normal formation and elimination equilibrium is unbalanced. Besides, free radical imbalance can speed up the aging process in a human.

Fortunately, with ample sesamol uptake, one can avoid problems related to free radical formation and elimination imbalance. This is because sesamol has free radical scavenging capability which is equal to vitamin C’s. Better still, the natural oxidant can bar hydroxyl radical and superoxide anion production.

Metabolic syndrome refers to a pathological health issue that results from metabolic disorders like Obesity, hyperinsulinemia, diabetes and hyperlipidemia.

Sesamol can improve obesity (too much fat tissue accumulation in the body) by:

Just like sesamin, sesamol can improve the function of the mitochondria in the liver as well as the adipose tissue, thereby preventing obesity.

The environment we are living in is highly prone to lots of possibly harmful radiation, thanks to science and technological advancements. Fortunately, according to a study by Nair G G et al to establish the anti-radiation potential of sesamol, the researchers found out that the compound offers DNA and cell membrane remarkable protection from radiation damage.

How does Sesamol metabolized from the body?

After digestion in the gastrointestinal tract, allyl sesamol gets absorbed into your body. Initially, some of the ingested sesame phenol is broken down to a conjugated product like sesaminol sulfate or sesame phenol glucuronide in the liver, to thanks to biphasic enzyme.

Then, the allyl sesamol that hasn’t been metabolized and its conjugate go through conjugation. The conjugated product is carried to other body tissues (brain and lungs, among others). However, most of the product is transported to the lungs and kidneys.

What is Sesamol used for?

Whether sesamol ether or sesamol supplement or Sesamol powder, the compound can be useful in:

In case you are interested in making a Sesamol powder buy, it’s important to make sure that you get it from a reputable source. This gives you confidence that the product you are going to buy is authentic and will deliver the desired sesamol benefits.

With the ongoing technological advancement, making a sesamol buy has never been so easy. You can order Sesamol powder or sesamol ether for industrial use or sesamol supplement right at the comfort of your phone’s or PC’s screen. 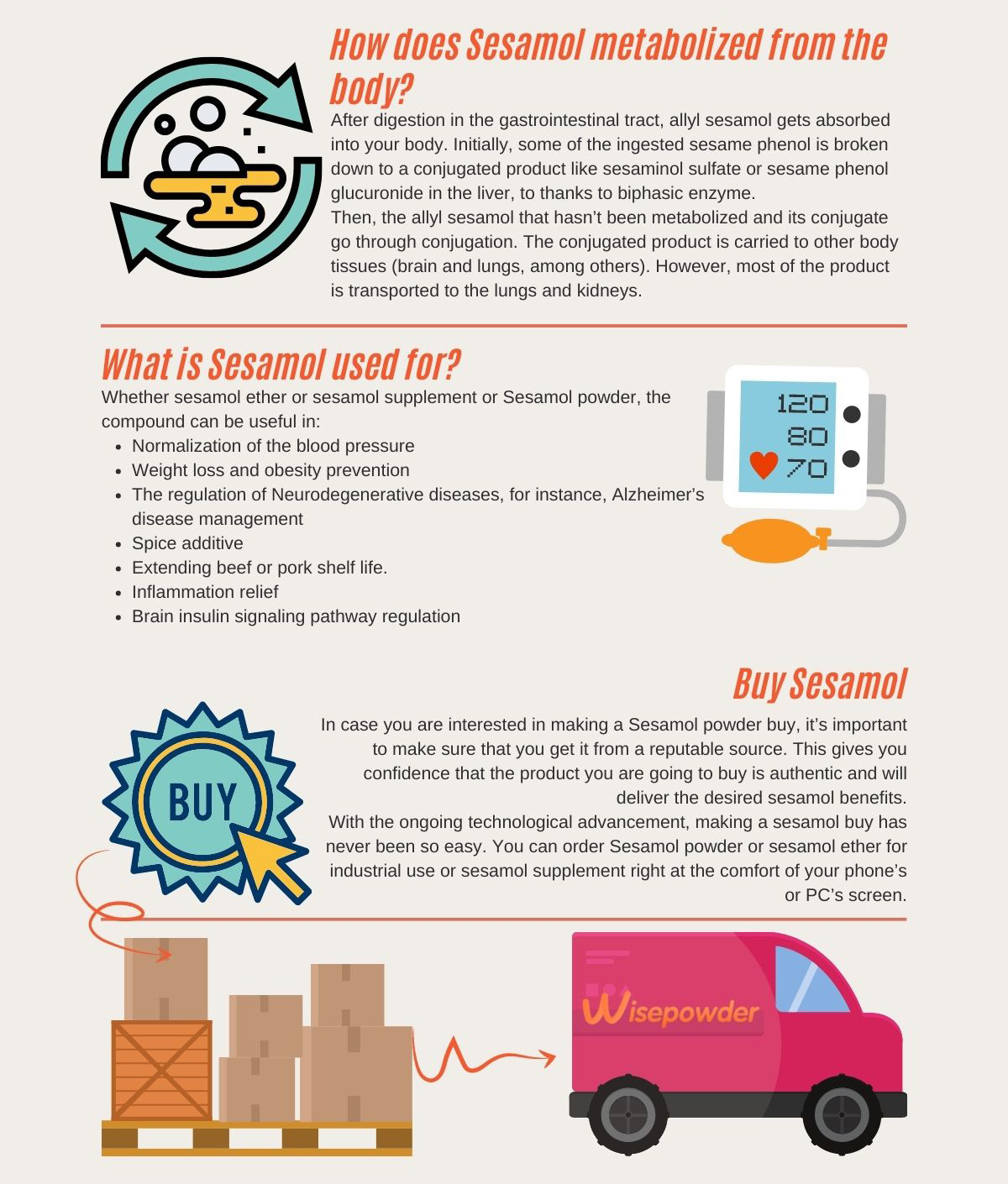