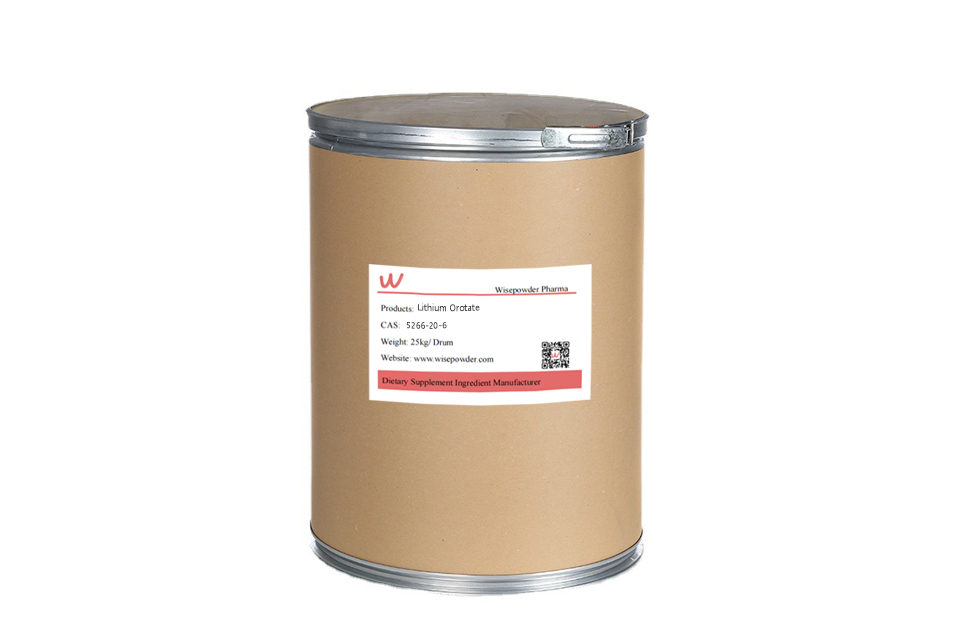 lithium orotate is a lithium supplement in the combination of orotic acid and lithium, beneficial to the ease of bipolar disorders, mania, depression, anxiety, and brain health, etc. Lithium is a naturally occurring trace element that could not exist alone, and it has to be in the salt form with other ingredients. Lithium orotate has been in the dietary supplement industry for more than 30 years, but until these years has it made itself popular.

Lithium orotate supplements are available in lithium orotate capsules, tablets, etc. However, our bulk raw lithium orotate is in white crystalline powder form with CAS number 5266-20-6, is not a medicine or drug, it’s a mineral, to be exact, a microelement similar to salt.

Lithium (not specifically the orotate salt) has been associated with curative properties in Greek literature for centuries, while visits to natural lithium-enriched waters were reportedly undertaken by Mark Twain, Grover Cleveland, and Theodore Roosevelt, among others, in the 19th century. A lithium citrate–containing beverage was marketed as “lithiated lemon soda” in the mid 1900s, apparently to make it seem healthier. Lithium has been associated with longevity in Japanese literature, and historically was considered beneficial in treating hepatitis.

How does lithium orotate work? Though its exact mechanism of action in the brain is still unknown, lithium orotate has been proven in the research to improve natural chemical activity, including those of dopamine and serotonin, and also to lessen the activity from the excitatory brain chemical glutamate.

Lithium orotate releases the lithium ion into the plasma and brain much like pharmaceutical lithium carbonate and citrate. This really is much the same way prescription lithium works, although with no toxicity. Lithium orotate effectively addresses bipolar unpredictability by growing the uptake of two thrilling chemicals (dopamine and norepinephrine) into synaptosomes. Synaptosomes are squeezed off nerve being that can’t release the body’s hormones. This can help individuals to remain calm once they would certainly not be. Lithium interrupts the signaling of among the D2 dopamine receptors within the brain. Elevated dopamine causes individuals to act impulsively and occasionally. Lithium orotate, citrate, carbonate also suppresses the glycogen synthase kinase 3 (GSK-3) enzyme that is essential in the cell’s reaction to many signaling molecules. By destabilizing the D2 / GSK3 signaling path complex mania is reduced.

Additionally, it plays a part in the gene expression of natural detoxing enzymes within the brain, including glutathiones-transferase, offering important brain antioxidant protection, adding to higher cognitive health insurance and memory. Other studies have proven it to improve DHA within the brain, as well as to advertise cognitive durability.

Lithium orotate is a dietary supplement that can be used in small doses to treat conditions like manic depression, alcoholism, ADHD and ADD, depression, aggression, PTSD, Alzheimer’s Disease and overall stress management.

Lithium orotate has also been used with success in alleviating the pain from migraine and cluster headaches, low white blood cell counts, juvenile convulsive disease, alcoholism and liver disorders. And it is also reported that patients with myopia (nearsightedness) and glaucoma often benefit from the slight dehydrating effect of lithium on the eye, resulting in improvement in vision and reduction of intraocular pressure.

Bioavailability of lithium may be the primary difference. The lithium ion is attached to salts, like carbonate from carbonic acid, citrate from citric acid, or orotate from orotic acid. So, the concept when taking any kind of lithium, gets the basic lithium, which is effective, to be absorbed through the body.

Lithium orotate enhances the particular effects of lithium many-fold by growing lithium bio-utilization. The orotates transport the lithium towards the membranes of mitochondria, lysosomes and also the glia cells. Lithium orotate balances the lysosomal membranes and prevents the enzyme responses that handle the sodium depletion and dehydration effects of other lithium salts.